Michael Porter Jr. is Superman without the cape ... only he can jump higher than Superman.

I'll have the Porterhouse: What

a feast it's been for Mizzou fans

Rock-chalk Jayhawks ... you're through. (Sung to the annoying tune performed by KU fans near the end of a win. Not this time. What do they do for entertainment in Kansas when it's not basketball season, anyway? I mean, what are the options?

Oh, right, they come to Missouri.)

This would be the proverbial icing on the cake for Tiger fans, who've been treated to a smorgasbord of tasty treats in recent days.

They've certainly earned it and deserved it after watching the agonizing meltdown of their two favorite teams the last few years.

Kansas losing is the icing, but the cake, of course, is Michael Porter Jr., the No. 1 recruit in the Universe, announcing he would now attend the University of Missouri. He's Superman without the cape --- only he can jump higher.

But this is a story and a process that goes back years, all of which had to happen for this to happen.

The cake was the dessert of this multi-course meal, a meal that came on the heels of guy named Frank dumping a big pile of Haith on Missouri's basketball program.

THE SEARCH, PART I: Time to look in the phone book for a restaurant/new coach. Wait, do we even have phone books anymore?

All the good ones were busy, because nobody wanted to step into the mess following the horse in Haith's parade, NCAA investigations and all. Enter a favorite son of Ol' Mizzou, Kim Anderson, who took one for the team. A big one.

THE SEARCH, PART II: Suddenly, many restaurants/coaches were available. The stench was gone, and this was a chance to turn around a program that has a good history, a good fan base, and plays in a conference where immediate success is possible.

But then, just look at what the SEC did in the NCAA Tournament. One team in the Final Four, three in the Elite Eight, and two teams losing to eventual Final Four teams along the way.

What in the name of James Naismith is going on here? Three SEC teams in the Elite Eight and only one ACC team? This, of course, after an ACC team beat an SEC team in the national championship football game. And after the Cubs won the World Series.

Yes, the end is near.

THE APPETIZER: Finally sitting at a fine restaurant, it's time to look at the menu --- and you can basically afford anything you want, even if it costs $21 million.

At the table next to you, you see a distasteful looking appetizer --- you know you don't want that. Raw fish? No thanks. In this case, it was Lorenzo Romar getting fired by the University of Washington.

But on a smaller plate, you see exactly what you want --- Romar's assistant and BFF, Michael Porter Sr.

THE MAIN COURSE: The backbone of the meal, the one that's going to stick with you for a long time --- the Cuonzo Martin. A local favorite, a proven winner that would go really, really well with that appetizer you just saw.

It's called the Cuonzo Martin on the menu, but that's just another name for the Porterhouse.

DESSERT: How sweet it is.

Martin hired Michael Sr. and got the 6-10 Michael Jr. in the process, who announced on Twitter: "MIZZOU NATION I'M COMING HOME!!!"

This is not to mention his "little" brother, 6-11 Jontay, who's scheduled to be a senior this fall. But Jontay may graduate high school early and be reclassified, joining his brother at MU.

After leading Tolton to the Class 3 Missouri state championship in 2016, the Porters --- who are Romar's godsons --- led Seattle's Nathan Hale to a 29-0 mark and the Washington Class 3 state championship this spring. Michael averaged 35 points and 14 rebounds, was named the Washington State Player of the Year, and the Naismith National Player of the Year.

If you know a free throw is worth one point, then you've probably heard of Lonzo Ball. He's already declared for the NBA, and Michael will likely do the same after one season with the Tigers.

For those of you who don't like the one-and-done's, please keep it to yourself.

Because one is a whole lot better than none.

THE AFTER-DINNER MINT: Fans in Central Missouri had the pleasure of watching Michael Porter Jr. mature --- grow up wouldn't be the right term, because he was 6-7 at age 14 --- when he attended Father Tolton. If you saw him, you know. If you didn't, watch this highlight from 2014 in a game at Fleming Fieldhouse: https://www.youtube.com/watch?v=PzGYjQVq-og

And for those of you who don't like giving $21 million to a basketball coach for seven years --- the deal Missouri gave Martin --- when other school programs are being cut .... you can keep that to yourself, too.

Besides, the bottom line is that these moves can change the entire face and fortune$ of a university, not just that of the basketball program or athletic department, but the entire school and its coffers.

Sometimes, you have to spend big to get big.

Everybody likes to be associated with a winner, including the student body. Just look at the sagging enrollment since the outrageous mess in the fall of 2015 that surrounded the football team --- and look at the money that's been lost with all those empty seats, in both football and men's basketball.

There were deeper issues on the table, of course, but they would have been back page news if not for the involvement of the football team.

Michael Jr. also Tweeted: "I'm looking forward to the year ahead with Coach Cuonzo and my new teammates ... Together we hope to restore the atmosphere at Mizzou Arena."

This move will pay for itself. And then some.

This is really happening, Mizzou fans --- and it wouldn't have happened if it all hadn't happened. So next March, don't be surprised if we have a team to pull for in the NCAA Tournament, instead of just hoping another team loses.

It's all good, really good.

Mizzou fans should be
brimming with hope

after hire of Martin 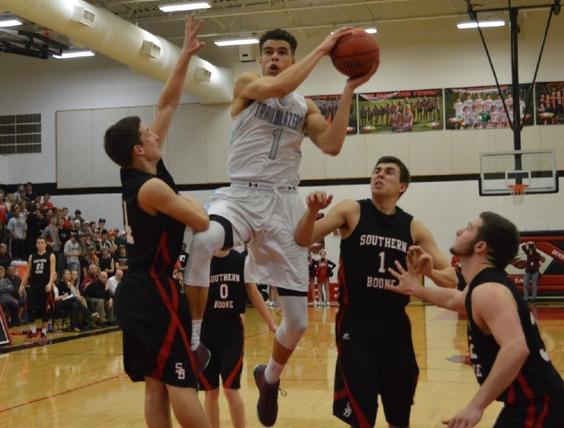