practice at their place when we didn't have access to our gym.

"It became a great resource for us."

The experience with Krzyzewski, one of the true legends of the game, led to a change of heart for Moseley. For him, the Blue Devils had been what the Jayhawks are to Mizzou fans.

But when you're talking about a guy who probably can walk on water, well ...

"I grew up a UNC fan early in my life and at that point, I didn't care for him," said Moseley, a North Carolina native. "But after getting to meet him, he's just a genuinely good guy. He and his staff became very good friends, they looked out for us.

"He would allow us to watch their practices, give us the practice plan, and we'd talk basketball. For a young basketball junkie, that was about as good as it gets."

You can only imagine ... Heaven on Earth.

"We'd be on the road recruiting," Moseley continued, "we'd see him at an event, and he'd speak to you and make you feel like a million bucks. It was a great time for me."

In Moseley's first year at Central, the school was making the transition from a Division II basketball school to Division I.

"It was great to see a program being built, to see it develop year to year," said Moseley, who served as an assistant head coach to LeVelle Moton his last three years. "We made progress each year ... you could really feel it over that four-year period."

The Eagles got better every year, indeed, from 15 wins to 17 wins to 22 wins. Then came the 2013-14 season, when Central went 28-6, won the MEAC Tournament --- the school's first conference championship since 1950 --- and earned an automatic bid to the NCAA Tournament.

"It was a tremendous weekend --- to see it all come together and culminate in a championship, that group will forever be remembered as the first team to go to the Division I NCAA Tournament," Moseley said. "To see them get to experience that, it was awesome.

"The support was growing and obviously, when you win and go to the tournament, it really captures the entire university and really, it captured the city. Though they've been spoiled to have Duke, North Carolina Central has carved its own path and has its own tremendous program, now."

Selection Sunday, 2014, was special in its own right.

"It's just surreal to be in a gym packed with your fans, and people who have gone through the trials with you," Moseley said. "To see your name pop up ... for the players and fans, it's pure joy. For the coaches, the second your name pops up with an opponent, you begin the coaching side of it."

Forget that the Eagles, who were a 14 seed, lost to No. 3 seed Iowa State 93-75 in their first round game in San Antonio. The team got to experience the Big Dance and all that goes with it, including the team's first charter flight, 5-star, Texas-style accommodations, and police escorts to practices and the game.

"You're treated like royalty," Moseley said. "You're like a little kid on Christmas morning for that entire experience. It's something I'll always remember."

As if you needed more reason to be a fan of the Eagles ...

But in this the season of Madness and stunning upsets, there's still never been a 16 seed beat a 1 seed. And it won't happen this year, either.

"To LeVelle's credit," Moseley said, "he's going to make them believe they belong in that game. We played a lot of bigger schools when I was there and he's continued to do so, so he'll coach his way into a pretty good game.

"His team will take the court with a confidence about themselves that if they do things the way he asks, they'll be in a position to make the game interesting."

Maybe, just maybe, Mizzou will hire the right coach and make the NCAA Tournament a lot more interesting for all of us some day.

Sooner rather than later would be good. 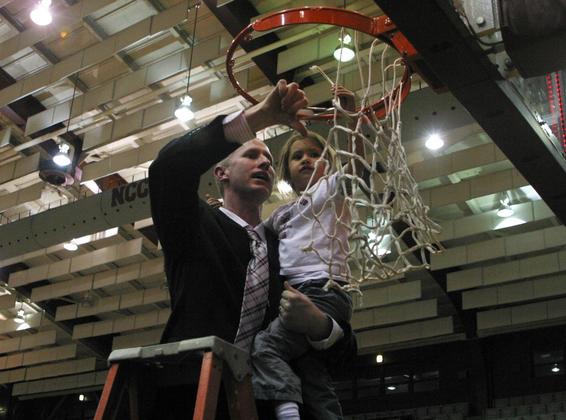 While the struggles continue for the Mizzou men, the women are going to the NCAA Tournament for the second straight year.

The No. 25 Tigers (21-10) are the sixth seed in the Stockton Region, and will open the tournament against 11th seed South Florida (24-8) at 4:15 p.m. Friday in Tallahassee. The winner will face either Florida State or Western Illinois in the second round.

If you're dreaming of a possible run to the Final Four for the Tigers, there is hope --- UConn is in a different region.The top seed in Mizzou's region is South Carolina, a team the Tigers have already beaten this season.

Barring injuries or something else unforeseen, however, the UConn women will win it all once again. If you had your choice, would you take UConn or the field?

That's what I thought. Every team in the country not named UConn is playing for second place.

For perspective, Vegas lists South Florida as a 1-point favorite against Mizzou.

John Moseley, now head coach of the Lincoln Blue Tigers, gets some assistance in cutting down the net from his 4 year-old daughter, Jillian, after North Carolina Central won the MEAC Tournament championship in 2014, earning the school its first berth in the NCAA Tournament.

JEFFERSON CITY, Mo. --- It's not as much fun to fill out your NCAA bracket these days, is it?

Especially when the closest team to us in the tournament resides in Lawrence, Kan. You can't spell puke without the KU, right?

Let's recap the state of Missouri's three best chances to get invitations to this very special Dance.

Stink. Stank. Stunk. (Below is not necessarily listed in order of smelliness.)

* But there's also Saint Louis University, which was quite good as recently as 2014. Not this year. The Billikens were 12-21.

* Missouri State actually finished the season with a winning record, 17-16, but that wasn't even good enough for the NIT. That's because the Bears had an RPI (209) that was way too high --- as was their BPI, SOS, TBS, UFO and STD, apparently.

Sure, we'll all still fill out a bracket, it's what we do. Then we'll watch it fall apart by Friday afternoon of the first weekend.

We need somebody to pull for, a team to call our own ... even if it's a 16 seed and even if it's only for one game. And even if that game is actually played before the first weekend, because it's a play-in game against Cal-Davis on Wednesday night.

North Carolina Central, the Eagles, our very own 16th seed, a team that came to Columbia and beat Mizzou 62-52 in Columbia back in November. But that's not enough reason to pull for this team.

The reason is John Moseley, who's currently directing a basketball renaissance with the Lincoln Blue Tigers --- and we love him for it. What he's doing is, well ... okay, he's not quite Helen Keller and he's not walking on water --- yet --- but what he's done with the Blue Tigers is something most folks thought was impossible.

Before coming to Jefferson City, however, Moseley helped direct a renaissance in Durham, N.C., home of our new favorite team, the North Carolina Central Eagles. Durham also serves as home of another college team you may have heard of.

But Moseley insists it wasn't a negative experience, not at all. In fact, it was just the opposite.

"We actually used it to our benefit, because kids knew where you were located right away," said Moseley, who spent four years with the Eagles. "Coach K (Mike Krzyzewski) and the Duke staff were great --- we would

Need a team to pull for in tourney?
How about N.C. Central Eagles