A disappointing pause, to be sure, but a pause nonetheless.

And it doesn't really matter what the scoreboard reads on Friday, either, this story will have a happy ending.

As it should. Because this dream season has been something special.

There's no sugar-coating this one, however, as the tradition-rich Walnut Grove Lady Tigers brushed aside the Prairie Home Lady Panthers --- these new kids on the block --- 57-36 in the Class 1 semifinals Thursday night at Mizzou Arena.

"I thought we came out kind of flat tonight. I don't know why, but we did," Lady Panthers coach Dalton Armontrout said. "I'm sure the atmosphere and everything else had something to do with it, but I thought we were kind of timid. We didn't attack the basket at all.

"We were out of rhythm and we stood around a lot tonight, more than usual."

As usual, the Lady Panthers were out-numbered --- Walnut Grove had more cheerleaders (eight) than Prairie Home has players (six).

There was also the weight of history that made Prairie Home the underdog --- if not the prohibitive underdog --- including this being the school's first trip to the Final Four --- in any sport.

On the flip side, this was the Lady Tigers' eighth trip to the Final Four, and they're seeking their fifth state championship overall and fourth in five years.

Further, there were these numbers:

"That's huge," Armontrout said. "They're used to this ... we're just not used to being in the spotlight."

It started out well enough for the Lady Panthers (22-9), who were playing in front of a huge contingent of their fans.

"We had a good crowd tonight," Armontrout said. "I don't think there are that many people in Prairie Home."

The Lady Panthers trailed only 18-14 after one quarter, thanks to 11 first-quarter points from 5-10 senior Shianne Rhorer, including a 3-pointer with 6 seconds left in the frame.

"She got loose a little bit, but it's hard to keep her down," Walnut Grove coach Rory Henry said. "But we talked about it after the first quarter, not wanting to give her a lot of room --- every time she turned around, we wanted somebody else coming."

It worked. Rhorer scored only five points in the last three quarters and finished with 16.

The difference in the game was one run --- just one --- by the Lady Tigers (28-4). Unfortunately for Prairie Home, it began at the start of the second quarter and lasted until midway through the third.

Walnut Grove outscored Prairie Home 17-4 in the second quarter to open up a 35-18 at the break, then started the second half with seven straight points as the lead ballooned to 42-18.

"We started to pressure them a little bit," Henry said, "got some turnovers, got some steals and started to get out (on the break). And we hit some shots.

Including a trio of 3-pointers in the second quarter by Bayley Harmon, who finished with a game-high 21 points.

"She decided to hit three 3s in a row," Armontrout said. "We couldn't get out on her and she couldn't miss."

After being knocked into that 24-point deficit, the Lady Panthers showed some grit and didn't quit, because that 24-point lead could have easily turned into 34.

Instead, they got back within 47-27 after three, then closed the gap to 15 points on two occasions in the fourth. And after the second, they had the ball with a chance to get within 12 or 13 with still four minutes left.

But a charging call --- one of those calls they can go either way --- went against Rhorer. While that was the end of this mini-comeback, it still showed plenty of moxey.

"I was very proud of them," Armontrout said. "These girls, they don't give up, they fight until their are zeroes on the clock."

Henry agreed, as the surge put Walnut Grove a bit on its heels --- the Lady Tigers started to run clock instead of trying to score. Further, their starters didn't leave the game until the final minute.

"They played hard, they didn't quit the entire game," Henry said of the Lady Panthers. "Hats off to them --- that's impressive when you only have six players, to play as hard as they do."

Freshman Ashlyn Twenter, who was averaging two points, had a big game in the losing cause, hitting three 3-pointers and scoring nine. And while Rhorer (averaging 23.6 points a game) was shut down after the first quarter, the team's other big scorer, senior Rachel Distler (18.3 ppg.) made only 1-of-7 field goals and finished with eight points.

There's one more chapter to write in this memorable book about a Prairie Home season that will never be forgotten --- the third-place game against South Iron (23-8) at 12:45 p.m. Friday at Mizzou Arena.

Third-place games are usually uninspiring affairs. That, however, shouldn't be the case in this one, at least not for the Lady Panthers.

"It's still Mizzou Arena, it's still a trophy game," Armontrout said. "I don't know how you cannot get pumped about it." 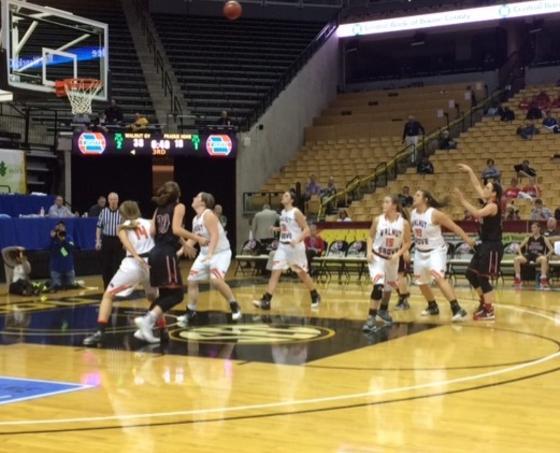 Believe it or not,
Prairie Home girls
have date in Columbia

Prairie Home season will have
happy ending despite of this loss