JEFFERSON CITY, Mo. --- It really didn't matter how good, or how bad, the other team was.

And let's be honest, the other team wasn't, well ... let's just say they weren't the UConn women.

Still, this was for a district championship and this was impressive. It was overpowering. Devastating.

Not to mention drought-breaking.

The top-seeded and fourth-ranked Lady Jays used a 17-0 outburst in the first half Thursday night on their way to a 52-21 thrashing of the Holt Lady Indians in the Class 5 District 8 championship game at Fleming Fieldhouse.

In the nightcap of the Jefferson City district doubleheader, there would be no sweep, as the Battle Spartans beat the Jays 85-69.

For the Jefferson City girls, however, this was the program's first district title since 2009 --- and there was no doubt about it

"This was probably one of our better games in the past month," Lady Jays coach Brad Conway said. "I thought our energy was really, really good coming out.

"We'd talked about our defense leading to offense, which we were doing at the first of the year. Then, for whatever reason, we kind of got away from it. But tonight, we got our press going and our half-court defense got some steals that led to some easy opportunities, and that was really our focus for this game."

Perhaps it's no surprise, then, that this defense has been scary-good most of the season, and it was especially good Thursday night.

Here were the offensive highlights for Holt.

* Griesenauer hit a 3-pointer with 5:13 left in the third quarter to get the Lady Indians to double-figure. Unfortunately for Holt, the deficit was still 32-12.

"I was thoroughly pleased," Conway said, "with our defensive effort."

After Griesenauer's early bucket, the Lady Jays (24-3) scored the last six points of the first quarter to take an 8-2 lead, then put the game away by scoring the first 11 of the second quarter to finish off the 17-0 run and make it 19-2.

"I know we started off a little slow," Conway said, "but once we got our press going, got some deflections and got some steals, it was kind of a snowball effect.

"And offensively, I thought we did a pretty good job of executing."

Free throws, however, continue to be penalty shots for this team, as the Lady Jays were just 10-of-22 from the line. Sooner or later, those might be costly.

But not on this night.

"This feels awesome, especially for the seniors," said Lexy Haug, who scored nine points and is one of the team's four seniors. "We've been working for this since sophomore year, it's good to finally get it done."

It's doubly-sweet to get it done after being upset by Waynesville in last year's district championship game.

'We had that (second-place) district plaque from last year before the game," Conway said, "as a reminder that you still have to come out and you still have to play the game. We told the kids if they stayed focused and did the things we practiced on the last two days, I thought we'd be in good shape."

As he should have.

Besides playing on and staying home, here's another big difference between the two:

* While the Lady Jays have trouble scoring, at times, they are rock-solid defensively.

* The Jays could score, but they had trouble stopping anyone, even average opponents. That doomed them against the Spartans (12-15), who took advantage of too many wide-open looks from both beyond the arc and on the interior.

Battle's Jarel Hyler scored on a short jumper in the opening seconds, as the Spartans would enjoy a wire-to-wire victory. That started a 7-0 run in the opening 90 seconds, a run caped on a 3-pointer by Daviante Ostrander, who led a balanced Battle attack with 18 points.

Jefferson City would get no closer than 11 the rest of the way.

The noteworthy high school career of Kamari Balton came to an end for the Jays, as the senior scored 27 points, giving him 57 points in this week's two district games. Junior Rae'Quan Davis chipped in 13 points in the losing cause.

For Battle, which will likley meet No. 1 ranked Webster Groves (25-2) in the sectionals Wednesday night, Trae Meny and Alexander Smith added 16 points apiece, with the effort by Meny, a junior, putting him over the 1,000-point mark for his career. Anthony Jones finished with 14 points. 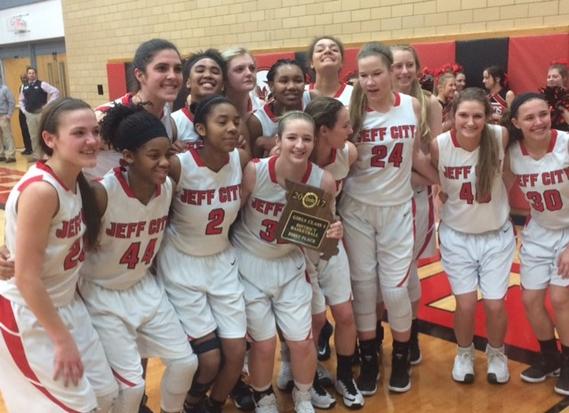