Daly, who's now on Champions Tour 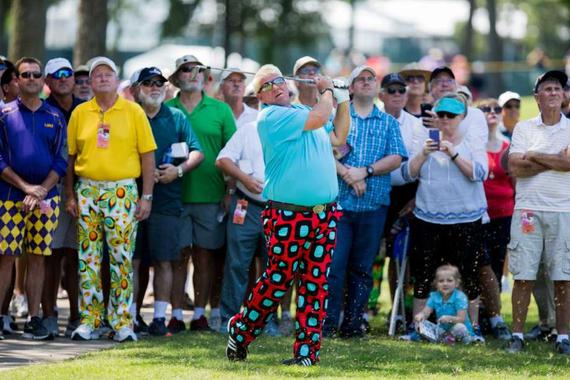 JEFFERSON CITY, Mo. --- The Champions Tour has sure gotten a lot longer.

And louder. Not to mention a lot more interesting and entertaining.

Long John --- best known for his long, back-breaking swing and even longer drives --- celebrated his 50th birthday on April 28 and joined the Champions Tour the next week.

This should be fun.

"It will be interesting to see where his game's at," Andy North said during a recent one-on-one interview at the tour's stop in Branson. "A lot of these guys turn 50 and they don't realize how well these other guys are playing. But he's a draw, it will be great to have him out here. Hopefully, he plays well and can be the John Daly who can help our tour.

"Because people love to watch him play ... he can be a real shot in the arm. He still hits it a mile and he can still go really low."

Joining the Champions Tour was not a last-second decision.

"I really started looking hard at it last year," Daly said on pgatour.com. "And now, I'm going to play as many events as I can. I want to see all the golf courses that we're playing ... it's going to be a full-time schedule for me most of the year."

Daly, a rare two-time major champion, has roots in Jefferson City, as he attended Helias for 2 1/2 years --- his sophomore and junior years, and the first semester of his senior year --- in the early 1980s.

His golf "coach" was Ray Hentges.

"I remember on the first day of practice," Hentges said, "he really went way past parallel with his first swing. My son, Chris, said: 'Dad, you're going to have to correct that.'

Ray chuckled then ... and now."We did not correct it," Hentges said. "He hit the ball right down the middle and he hit it a long way.

"I didn't do much coaching with him, I just watched him play and complimented him after his round, that's about it. He amazed me how consistent he was, even with that big, long backswing."

His junior season with the Crusaders, Daly was one-over par --- for the entire season. Not surprisingly, he won the individual state championship that year, after finishing second as a sophomore.

Daly was also the placekicker for the football team his senior year, and had an accurate range of 30-35 yards. He booted 10 extra points in a blowout win over Moberly, and kicked two field goals in a 6-0 win over Rock Bridge.

Away from the course and field, Daly "was just a nice kid, bashful and shy, not real rowdy," Hentges said.

Unfortunately, his rowdy days were coming. Daly was placed on probation six times by the PGA Tour, ordered to go to counseling or alcohol rehab seven times, and was cited for conduct unbecoming a professional 11 times.

The gambling losses for Daly, who's been married and divorced four times, are legendarily sad --- he estimates his losses to be about $55 million, although other sources put the total closer to $90 million.

"He was a raw talent who probably didn't live up to his potential, because he was involved in some of the off-the-course shenanigans," Hentges said. "If he would have kept the outside stuff under control, who knows what he could have done."

One bet Daly apparently did win was with fellow pro and good friend, Fuzzy Zoeller. The wager was $150,000 and made years and years ago, as Fuzzy said John wouldn't be around to see his 50th birthday.

Well, here he is. Thankfully.

Then there were the golf skeptics who said Daly's career wouldn't last because of his long, painful-looking swing --- the human body, especially the back, couldn't handle that swing as he got older, they said.

Well, here he is.

"His back hasn't been thrown out of wack yet ... he's got unbelievable flexibility," Hentges said. "There are very few people who can extend their arms and twist their back and uncoil like he does at 30, let alone 50. It's kind of remarkable that he's still able to do it.

"I think he can have a good career out there, maybe for the next 10 years. He'll be a big draw, I'm sure of that."

He'll be a draw partly because of his pants, which are part of his own Loudmouth collection. These pants are so loud they could wake Jimmy Hoffa.

"They are wild, I'll say that," Hentges said.

"That they do," Hentges said. "I don't think any other golfer can market those like John can, just because of his personality.

"He's still a happy-go-lucky guy and still as generous as he can be. That's what makes me more proud of him than anything, his generosity. He's done a lot of good things."

In pure golf terms, Daly, who won the PGA and British Open, is an amazing and interesting study, just because of what he accomplished --- and what he didn't.

Only 29 golfers, ever, have won more major championships than Daly, and he's won as many as guys like Ben Crenshaw, Johnny Miller and Bernhard Langer. Daly's won more majors than guys like Adam Scott and Fred Couples.

But in his other 517 career starts, Daly only won three times. It's confounding.

The greatest players of all time recently shared some thoughts on Daly during a conversation with the Golf Channel:

LEE TREVINO: "He'll move the needle (on the Champions Tour), there's no question in my mind. People know him and they like him. He probably didn't do what he wanted to do on the regular tour ... John Daly is his own guy, he dances to his own band. But I think now, he knows he has a second chance, he's got a chance to really show his talent."

GARY PLAYER: "I thought next to Tiger Woods, John Daly was the most talented player I've ever seen. But he didn't have the passion and the ingredients that are required to use the talent to the best of his ability. That's a shame, because he could really play."

JACK NICKLAUS, on Daly's Champions Tour future: "It depends on him. If he behaves himself and does what he should do, he'll be a big force."