Falcons may be flying
under radar, but

it counts the most

Eagles past Falcons in title game

WARDSVILLE, Mo. --- In the biggest game of his life, Sam Stichnote certainly played like a sophomore Saturday night.

Only, he played sophomore in college.

And thanks to this high-caliber, high-level note hit by Stichnote, this week's transformation of the Green House to the Black Hole is complete.

Stichnote compiled game-high totals of 25 points and 13 rebounds Saturday night as the Southern Boone Eagles toppled the Blair Oaks Falcons 67-54 in the championship game of the Class 3 District 9 Tournament before an overflow crowd at Blair Oaks.

For a game that everyone figured would be close, this was surprisingly easy.

"I'm not surprised, I honestly felt great about this," Eagles coach Andy Jahnsen said. "I thought the best thing that happened to our team was losing in the Green House (by almost the identical score, 65-52 on Jan. 24). It woke us up and let us know that we are not invincible, we have to play every night and be the best we can be.

"That (Blair Oaks) is a great basketball team down there, but our team played their tails off. Not taking away from what they did, I'm just really proud of the way we played.

"These kids wanted this game."

They certainly did, especially after last year when the Eagles had the lousy luck and impossible task of playing Tolton and the Porter brothers in the district championship game.

"It's amazing for these seniors and last year's seniors --- they did as much as we did this year," Stichnote said. "It's all for them, it's just an amazing feeling."

In winning their first district title in five years, the second-seeded and second-ranked Eagles (25-3) took most of the drama out of this one early.

Zane Safely hit two 3-pointers in the first quarter and Stichnote had five points and five rebounds as Southern Boone --- which never trailed --- took an 18-9 lead. The lead increased to 23-9 early in the second quarter, before the top-seeded and eighth-ranked Falcons (23-5) put together their best stretch of the game.

Thomas Verslues, who led the Falcons with 21 points, hit 3-pointers to start and finish a 15-4 surge, as Blair Oaks cut the deficit to 29-24 late in the first half. But the Eagles scored the next four points to rebuild a 33-24 lead at the break, then outscored the Eagles 19-11 in the third quarter to break it open at 52-35 entering the fourth.

Blair Oaks got no closer than 11 the rest of the way.

Mission accomplished. Because on those 50-50 balls, the Eagles seemed to get 90 percent of them.

"We were everywhere," Jahnsen said. "It's one of the best defensive games we've played all year and offensively, we executed the game plan to a T."

Jason Rackers and Dylan Skinner, two of Blair Oaks' five seniors, added 10 points apiece in the losing cause, while Safely tallied 14 for the Eagles.

But this night belonged to Stichnote, who seemed calm and in control from the opening tip --- even though he apparently wasn't.

"Yeah, I was nervous," he said. "But who wouldn't be nervous before a game like this?"

On one play in the second half, he grabbed a defensive rebound and slithered his way around, through and past all five Falcons for a coast-to-coast layup.

On another play in the second half, the ball was going out of bounds off the Falcons, when a Blair Oaks player leaped in the air past the baseline and hurled it full speed toward Sticnhote, who was standing just inside the baseline. You've seen the play --- bounce it off the other guy and you get the ball out of bounds.

But Stichnote caught it. You just don't do that.

"He's a phenomenal sophomore," Jahnsen said, "but he's got four studs around him that makes his job a lot easier. Sam Stichnote is a part of a great basketball team. What he brings to this team is everything I want from all my kids --- to play as a team.

On the heels of the Lady Eagles win over St. James on Friday night, this completed a Southern Boone district sweep, as Wardsville became Ashland South. Now, both teams head to Rolla for the sectionals Wednesday night.

"It's awesome," Jahnsen said. "Our whole community's going to be behind us ... for sure, we're going to have crowd control over anyone else in there. We're just pumped about moving on and winning a district title. 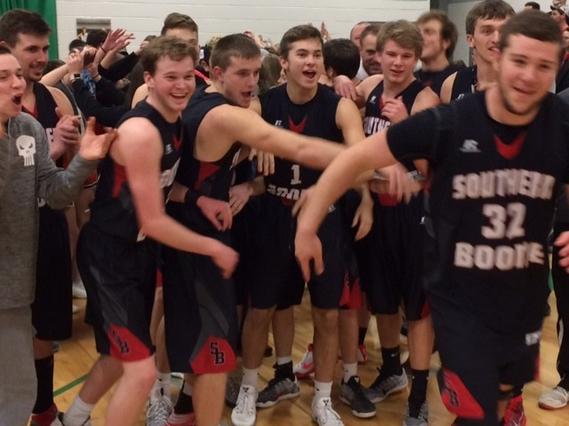 Southern Boone senior Colin Vaughan (32) is sent off by his teammates to claim the championship trophy after the Eagles beat the Blair Oaks Falcons on Saturday night in Wardsville.

clash with Falcons for