Northwest's Tyler Stegall used a takedown with 30 seconds left, then maneuvered his way to a pair of near-fall points with 4 seconds left to rally past Kuster 4-2 in the 138-pound championship match of the Class 4 State Wrestling Championships at Mizzou Arena.

Great one to win, a really tough one to lose. But it's all about perspective.

"He's disappointed but hey, if this is the worst thing that ever happens to him," Cagle said, "he's going to be a pretty lucky guy. He had a wonderful season and he'll build on this for next year."

After a scoreless first period, Kuster (42-2), a junior, took a 2-0 lead on a reversal just 14 seconds into the second. It appeared it might stay that way as the match entered the final minute, but then ....

"I was trying to get a couple extra points," Kuster said. "He caught me, I was a little careless."

While he lost, Kuster was not beaten.

"It's all been worth it, all the sacrifices you go through," he said. "I'm a two-sport athlete (soccer), so I don't have as much time for one sport or the other. This year, I focused a little more on wrestling and I plan to focus even more on it this coming year to really showcase my skills. Because I didn't show my best tonight.

"Winning the state championship, that's all there is left."

The Jays, with 10 state qualifiers, finished ninth with 59.5 points and had two other place-winners --- senior Charles Kusick, who was fifth at 126 pounds, and freshman Sam Rackers, who was sixth at 132.

"It was really a weird weekend for us," Cagle said. "But the kids, overall, as young as we are (six underclassmen qualified), wrestled really well."

A good Thursday night to open the tournament was followed by a rough Friday --- but it wasn't a surprising Friday.

"That was all about matchups," Cagle said. "When you get into that second round, well ... we told the kids that every one of these matches here is like a district championship.

"There are no slouches up here."

WHEN OAK GROVE'S CONNOR BROWN won the 126-pound Class championship Saturday, he became just the 26th wrestler in Missouri history --- a history dating back to 1952 --- to become a four-time state champion.

It also mathematically eliminated the Mexico Bulldogs from the team championship.

But if it's going to happen, it helps ease the pain, you would think, to lose it that way to a guy that good to this program --- this was Oak Grove's state-record 17th championship. Amazing.

So this wasn't about losing, at all.

After the Brown-out, the Bulldogs had yet to flex their muscles in the championship round --- and when they had their chance, flex them they did.

"They are special kids," Mexico coach Gayle Adams said. "They've put in a lot of work for the school, for the community and for themselves. I'm proud of them."

These were the second state titles for both Ekern and Wilson, but it still wasn't quite enough. A second-place, however, is impressive, nonetheless.

"What was nice is that we pushed Oak Grove all weekend," said Adams, whose team finished 10 points behind Oak Grove, 142-132. "They didn't wrap it up Friday night, so it's fun to know that we pushed them to the limit."

The best news of all is that two-thirds of the Terrific Trio will return next season. While Wilson is a senior, both Ekern and Aaron are juniors.

"We're coming back strong next year," Adams said, "so we'll see what we can do. It should be fun."

WINNING IS NOTHING NEW for Father Tolton junior Brock Mauller and --- barring something unforeseen --- he will join Connor Brown (see above) in that elite club next year.

He chose his living wisely.

The win puts an exclamation mark on Mauller's perfect 46-0 season, and improves his career record to a tidy 131-3.

What keeps driving him?

"I don't like to stay content, I like to challenge myself every day," he said. "I have goals like college and the Olympics, but I have small goals, too --- every time I step on the mat, I want to get better."

Mauller was joined on the golden podium by one his teammates, junior Jarrett Jacques (45-0), who won the title at 152 pounds. 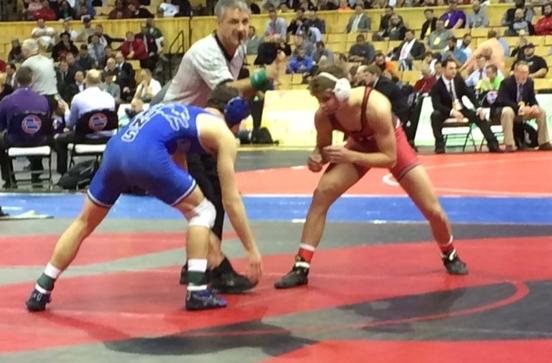 State bound: After
another solid season,
Jays have 10 wrestlers
headed to Columbia