No one should be surprised

by the firing of Kim Anderson 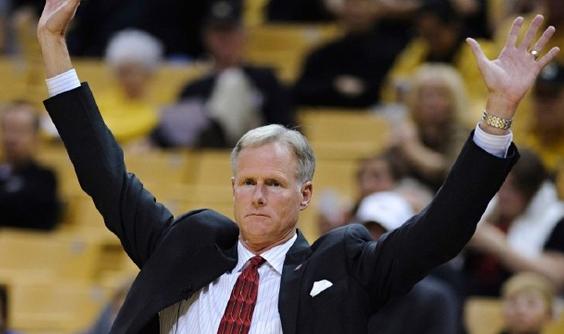 COLUMBIA, Mo. --- If this surprises you, you were probably surprised to learn Santa Claus was a fraud.

When you were 19. You probably should have known better.

While this was certainly expected, it's still sad, almost like a death in the family after a long, ugly battle that became so hard to watch.

Because this team, in Anderson's three years, became non-competitive and hard to watch --- and that's why Mizzou Arena was often less than half full. You can understand why. It's depressing on a cold winter's night to get out to watch a bad team on a Tuesday evening in a place less passionate than a college library.

“This decision has been very difficult for me, personally, because of the tremendous respect I have for Kim,” Missouri athletic director Jim Sterk said in a statement Sunday. “I know how hard he and his staff have worked to turn the program around over the last three years.

"However, the lack of on-court success has resulted in a significant drop in interest surrounding our program, and we could not afford for that to continue another year.”

To be fair, Anderson inherited a mess from Frank Haith, whose tenure has joined a list that includes Tyus Edny and Norfolk State as the most forgettable names and moments in Mizzou basketball history.

But that mess has turned into a disaster.

Anderson went 9-23 in his first season, 10-21 in his second, and he's 7-23  this season --- a season that includes losses to teams like North Carolina Central and Eastern Illinois. He’s 8-46 in SEC games and the Tigers have lost 35 straight road games.

Those are firing numbers.

Neither the recruiting nor the coaching have been very good. These players can't shoot and they can't defend --- and that's a really bad combination.

The move is effective at the end of the season, which will likely be one more game, a loss to Auburn in the SEC Tournament on Wednesday night.

That will close the book on this fairy tale for Anderson, a dream come true that turned into a nightmare.

On April 28, 2014, the favorite son Ol' Mizzou was hired by then-AD Mike Alden. Most people lauded the move, since Haith had bolted a sinking program that was under NCAA investigation --- thanks to him.

This hire was going to be the breath of fresh air to rid the program of the stench left by Haith.

Anderson, after all, is a product of Sedalia and had spent a combined 15 years with the Tigers as a player and assistant coach. He'd also had an assistant coaching stint at Baylor and was head coach for 12 years at the University of Central Missouri, where he won a Division II national championship the season before he returned to Columbia.

Great coach, better guy, proven winner, the anti-Haith. This was going to work, right? I said yes, my radio friend Will Palasczuk said no. We were both very sure.

"He won't be looking for the next job," Tom Dore, one of Anderson's Tiger teammates in the 1970s, said the day of the hire. "He loves Columbia, loves Missouri and is, for so many reasons, the right fit."

Two names being floated around as a possible replacement include Cuonzo Martin, who has St. Louis roots and is the current coach at California; and Lorenzo Romar, who employs Michael Porter Sr. as an assistant with the Washington Huskies. You might know the name, Porter ... and his sons, Michael Jr. and Jontay. Romar is likely to be fired at season's end, too.

But that conversation should be saved for another day. This is a day to say a sad farewell to Kim Anderson, whose dream became a reality and then went so terribly wrong.

You should feel bad for Anderson, not celebrate his failure.

Thank goodness for Arkansas and Vanderbilt, or Mizzou would be winless in the SEC in both football and men's basketball this school year. Think about that --- that's saying something while saying nothing, at all.

If the Tigers continue to struggle in football, as they did last fall, the same fate will befall Barry Odom in a few years. Because the football Tigers, like the basketball Tigers, were often a non-competitive, unwatchable team that had sagging attendance due to a lack of interest.

Let's hope against hope it doesn't happen, but it would be inevitable.

Barry Odom is another favorite son of Ol' Mizzou.

There's no Easter Bunny, either.

Kim Anderson's dream job with the Missouri Tigers turned out to be a nightmare.