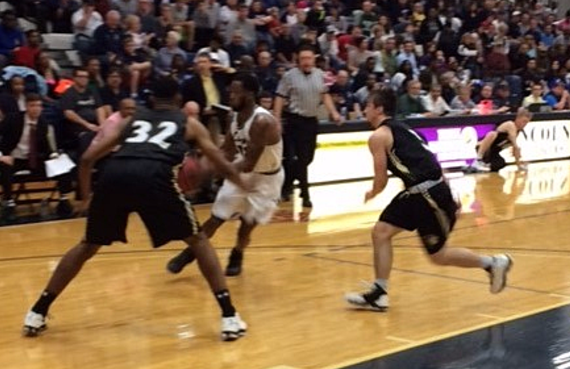 Lincoln senior Richie Lewis gets ready to drive between two defenders, including Lindenwood's Dominique Dobbs (32), during the first half of Saturday's game at Jason Gym.

Despite setback, this was a day

JEFFERSON CITY, Mo. --- Senior Day is always a chance for fans to say thank you, but that wasn't the case Saturday at Lincoln.

This was a chance for fans to say THANK YOU!

This senior class spearheaded what many thought was impossible, simply because losing was so embedded in this program's soul.

But the impossible dream has turned into reality --- they've transformed the Blue Tigers from a perennial loser back to a winning team, a relevant team, for the first time in a long time.

Despite of Saturday's disappointing loss, thank you.

"All of these guys came here with the single purpose of changing the culture of the program --- they were expecting to win," Lincoln coach John Moseley said after Lindenwood topped the Blue Tigers 76-67 before a full house at Jason Gym. "They're all two-year guys, and I could tell early last year when we lost a couple games that the tide was turning --- losing was no longer acceptable with these  guys.

"I knew right away we had a group of winners, and I can't say enough about what they should mean to this program and this university as we move forward."

Indeed, these guys looked the long odds and the history of this program squarely in the face and --- behind Moseley's direction --- chose Lincoln and made it happen.

Last year, they produced the program's first postseason game --- and postseason win --- in 29 years. 29 years. And with one more win this season, they'll produced the first back-to-back winning seasons in 15 years.

"We came here with a plan," said Moseley. "At my last institution (North Carolina Central) as an assistant coach and associate head coach, we got that program turned around, as well. (From seven wins to 15 to 17 to 21 to 28). We're taking a similar approach here.

"Many people thought I was crazy when I decided to take this job, because of the lack of success for so many years. But I was confident --- this university is a great place and Jefferson City is a great place and I thought we could attract good players here. I think these guys have convinced me that, without a doubt, I made the right decision."

The Blue Tigers could have one more home game, the first round of the MIAA Tournament on Feb. 28, if they finish as a 5-8 seed. But this loss did not help that cause.

The game started on such a fitting note, a perfectly fitting note, that you thought it was meant to be. The first six baskets for Lincoln (14-10, 7-8 MIAA) weren't just made by seniors, but they were made by five different seniors as the Blue Tigers sprinted to a 15-4 lead in the opening 3 1/2 minutes.

"If I'd scripted it that way," Moseley said, "I would have continued the script."

That turned Lindenwood's five-point deficit into a 60-52 lead with 12 minutes left, and the Lions would lead the rest of the way.

"Defensively, we just didn't close deals," Moseley said. "They had too many possessions in the second half when they scored with under four on the shot clock, and those are just breakdowns on defense.

"The shots they did miss in the second half, it seemed like they got every offensive rebound."

And it helped lead to the sixth home loss of the season for the Blue Tigers, who went 12-2 at Jason Gym last year. The seniors did their part on the scoring end, finishing with 65 of the 67 points --- Virdure scored 22 to lead the way, while Smith and Lewis both added 13.

"We're obviously disappointed in this outcome,"Moseley said, "but these guys are quality basketball players and quality young men, too."

All six should earn their degrees this calendar year, with three set to graduate in May.

"That tells you a lot about their character," Moseley continued. "They've been active in the community and the community has really rallied around them. They're easy to cheer for because when you see them outside of basketball, they're extremely well mannered and they're appreciative of the opportunity they've had here.

"When they come back in a few years, they can look back with great pride that they were the group that really helped us turned the corner. They're the foundation."

They certainly are. Thank you.