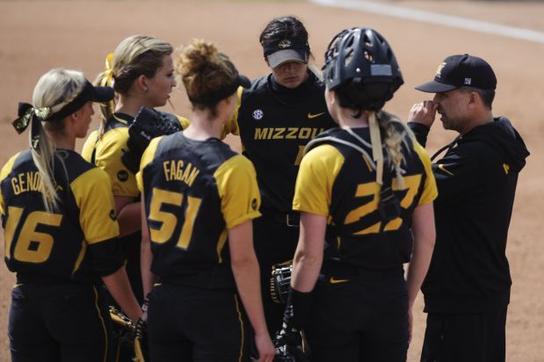 And you thought that after our seasons of discontent in the fall and winter, we'd have a calm, peaceful spring.

But the University of Missouri is the gift that keeps on giving, with the latest lump of coal coming from the softball program. As a result, Missouri Athletic Director Mack Rhoades seems to have head coach Ehren Earleywine in his crosshairs.

It's the latest incident in the meltdown within the university system and one of its sports program, deepening a black eye it's already suffered. And it's another meltdown that finds Rhoades in the middle of the controversy.

Critics of Rhoades --- who just "celebrated" his one-year anniversary on the job last month --- insist he didn't do enough last fall, when campus unrest ultimately led to a strike by the football team.

Remember when a strike in sports meant the batter swung and missed? Well, with Rhoades and many others sitting on the sidelines, the football team went on strike.

Live and learn --- Rhoades has tried to be proactive in the handling of this situation. But is he about to hit into a triple play, the fall-winter-spring trifecta? A swing and miss is better than a triple play, isn't it?

* A few players complained about the coaching style of Earleywine, 45, who's a graduate of Jefferson City High School. In other words, he was mean --- and here's a good guess those players weren't getting much playing time, either.

There's no crying in softball.

* Aware of the situation, Rhoades' department launched an investigation.

* The majority of the players didn't like it claiming, among other things, they were bullied and intimidated during the process. In other words, the investigators were mean.

Can anybody go one day without getting their feelings hurt anymore?

* The players had their own strike because of the "unfair" investigation. They called this a protest, however, during Saturday's home game against Mississippi State. They fully supported Earleywine, who's the winningest coach in Missouri history --- in ANY sport.

A statement that accompanied the protest said in part:

Missouri players are playing this game in protest of our athletic administration and specifically Missouri head AD Mack Rhoades. The Missouri athletic department is conducting a wholly unsubstantiated investigation of our softball program and the softball coaching staff. The softball players support and love our coaching staff, and we wonder why this black cloud is being put over our program intentionally by Mizzou AD Mack Rhoades.

Earleywine's job is on the line, but will Rhoades pull the trigger? He certainly shouldn't, unless there are far worse bad deeds than yelling at college athletes, even if he used some profanity.

Welcome to the real world, girls.

Earleywine is old school and he's the first to admit it. He doesn't apologize for it, nor should he.

"I'm a little bit of a throwback into a millennial culture of people," he said this weekend. "It forces you to evaluate how to coach, and it's not easy changing who you are and your instincts.

"But I know there are things I can do better, but at the same time, I am very proud of all we've built and accomplished and achieved here. I'm not ashamed of anything.

"I am trying to build resiliency and toughness in people and hoping that they'll be better people when they graduate from here because they've been through the tough stuff. Have I used inappropriate language? Yes. Is that grounds for firing a coach? I think if you set that precedent, there won't be another coach in America."

More from Earleywine, this during an interview with the St. Louis Post-Dispatch.

"We are who we are ... to me, I think the people of this area identify with that style," he said. "This is a blue-collar area. I grew up in Jeff City, that's blue collar. I think the silent majority of people in this state who follow us appreciate it."

Earleywine is in his 10th season with the Tigers and has compiled a sparkling record of 450-151, a winning percentage of 75 percent. This season, the 14th-ranked Tigers (39-13, 14-10) are destined to make their 10th straight appearance in the NCAA Tournament.

In terms of revenue at Mizzou, the softball program trails only football, basketball and wrestling.

Earleywine knows what he's doing and he does it very well. Let him do it. Another part of the players' statement read:

Let our coaches coach us! That's why we came here!

There's a great back-and-forth in the great movie, Patton, that really defines this situation. Rhoades should think about it when considering the fate of his softball coach.

Patton entered a military headquarters in Europe during World War II, where he spotted a solider sleeping in the hallway. The unit was in total disarray, with apparently no one in charge.

"What are you doing there, soldier?," Patton said.

"Trying to get some sleep, sir."

"Well," Patton said, "get back down there, son. You're the only son of a (gun) in this headquarters who knows what he's trying to do."

Rhoades should take a page