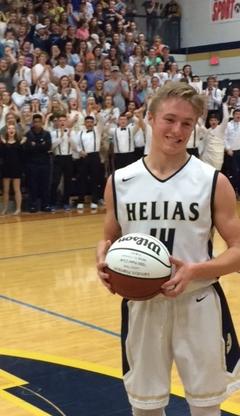 After a hard foul (right), Landon Harrison hit both free throws to join the Helias Crusaders' 1,000-point club, and he was then honored with a brief ceremony Friday night at Rackers Fieldhouse.

But how Landon Harrison got to the line to begin with, that's what made this so fitting --- because it was so him.

The 5-11 Helias junior drove down the lane like a crazed mom going after the last XBox on Black Friday. But unlike mom, Harrison was in control.

Harrison took a hard foul on the driving attempt with 2:19 left in the first quarter Friday night, and promptly splashed home two free throws. The second one landed him in an elite group in Helias basketball history.

Of all the hundreds and hundreds of young men who've played for the Crusaders through the decades, he's now only the 12th player to join the 1,000-point club.

"The most important thing is that we needed the win tonight," Harrison said after the Crusaders handled the Hickman Kewpies 72-49 at Rackers Fieldhouse. "But it's definitely exciting ... I'm very appreciative of everybody who's helped me along the way."

Harrison is the fifth player to join the club in Buffington's nine years at Helias, and the first underclassman --- that makes him even more elite. The school's all-time leading scorer is Jamaal Tatum with 1,785 points.

"It's hard to put in words how I feel about Landon Harrison," Helias coach Josh Buffington said. "He's such a leader for our program and what a great example to have for his teammates --- and even my own kids. He's earned every single point he's gotten in his career and he will earn every single point he gets from here on out."

"The way he's worked his entire life --- athletically and in the classroom --- and the way he's prepared, it's just unmatched," Buffington continued. "You can tell by watching him play the game. There's no such thing as 110 percent, but he's 100 percent with everything he does.

"He's so deserving of this prestigious honor."

The game was stopped briefly to honor Harrison, who's averaging 26 points this season and finished with 28 Friday night. He was so humbled when he received the ceremonial 1,000-point ball, he almost seemed ashamed.

Let's play basketball! was the look on his face.

"We'd kind of gotten off to a rough start," Harrison said, "so that's probably the reason I looked that way. We kind of got going after that."

It certainly seemed to jump-start the Crusaders (16-5), who trailed 8-3 after 4 1/2 slow-motion minutes. A 3-pointer by Alex Buschjost with 2 seconds left in the first quarter gave Helias a 13-12 lead, which the Crusaders stretched to 27-22 on the heels of a 10-2 run to finish the half.

The blowout took shape in the third quarter, when the Crusaders blasted the Kewpies (9-12) with a 17-0 burst to finish the frame and build a 58-34 lead entering the fourth.

"We didn't allow them to get out and get the easy baskets like we did in the first half," Buffington said. "We did a better job of executing in the half court to limit their run-outs.

"I thought we played really tough on both ends of the floor."

Sophomore Nick Brandt and freshman Marcus Anthony added 11 points apiece for the Crusaders, who were a tidy 11-of-26 beyond the arc.

"It's the best 3-point shooting night we've had all year," Buffington said.

But this night was mostly about Harrison, because a game in February is, well, just another game in February. Up next in Harrison's assault on the record book? The single-season mark of 697 points, also set by Tatum, as Harrison is approaching 600 points this season.

You think he knows or cares?

"I just hope," Harrison said, "we can keep going and make another state run like we did last year."

That is so him. 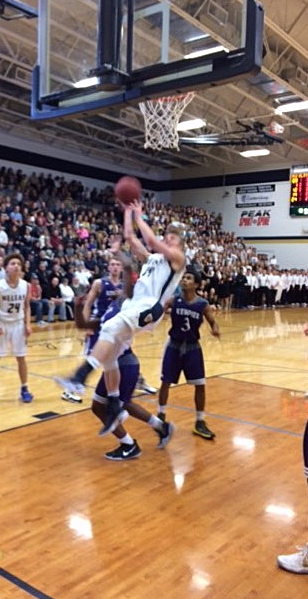