Turning the corner? Jays have won

JEFFERSON CITY, Mo. --- The last time it happened, some of you had just finished your Christmas shopping.

Others hadn't even started.

It was three weeks before Santa was due to arrive, anyway, so what's the hurry?

It doesn't sound like much, winning back-to-back games, but for the Jefferson City Jays, Tuesday night was a big hurdle to clear.

It was Dec. 2-3 at the Marshall Tournament the last time it happened. In between, what a long, strange, frustrating trip it's been.

"There was a lot of excitement in the locker room after the game, even a hint of relief," Jays coach Blair Thompson said. "The gratification that we proved to ourselves we can do it --- I think we knew we could, it was just a matter of putting it all together. And to do it on our home floor on Senior Night was special for our guys, too.

"It was a big win against a good team and a big rival."

Jefferson City 79, Hickman 77, overtime --- the type of games the Jays have been losing the last two months.

The Jays have endured so many near-misses, six losses by six points or less, games they could have won, if not should have won.

"I'd put them in the should-have category," Thompson said.

The Jays led Hickman by 14 points after one quarter. Think it was safe? The Jays lost one game this season when they led by 19 --- late in the third quarter.

Thompson insists, however, there was no self-doubt with the Jays on this night, even when the lead had vanished and the game went to overtime.

"The mentality was very positive," Thompson said. "Guys were picking each other up after mistakes, praising positive plays and just being supportive of each other. In the end, that's what it takes to win those type of games, guys coming together."

You'd like to have seen this happen before the first week of February, but better late than never.

"A big win like that always goes a long way toward making that happen," Thompson said, "as opposed to losing those tough ones that can be devastating to you mentally.

"Adversity has sometimes drawn us farther apart rather than bringing us closer together. We lost a few tough ones early in the season and you kind of felt doubt creep in --- it wasn't real positive. As a coaching staff, we've tried to remain positive, keep coaching and address those issues, keep playing together and moving forward."

"The picture's not always as clear for (the players) as it is the coaches. They need to understand they might have to make some sacrifices for our team's good. The teams you see having good runs in the postseason and winning tough games, they're the ones who have figured that out.

"I think our kids are very aware of that fact, it's just a matter of reinforcing it and that it's there all of the time, not just some of the time."

The Jays are now are modest 9-12, but you still have the feeling they can be dangerous down the stretch. As in, district-championship dangerous.

"Other than the Glendale game (a 91-70 loss), we've been in every game this season," Thompson said. "But for one reason or another, we've had breakdowns toward the end that didn't allow us to come out with the win.

"It's a learning process. We've got some young players on the team that didn't have a lot of varsity experience, but I think we might be finding what we've been looking for all along."

It's been a learning process for all involved.

"We've been playing 10 guys all year," Thompson said. "Consistency has been a real problem, that's part of the reason we've played 10 guys, giving those guys opportunities and just looking for lineups and guys who are consistent.

"A lot of games, we've had slow starts and been searching for the right combination. You get a lot of different rotations and it's hard to develop consistency when you're doing that. But I think we're making progress and getting closer to doing that."

The Jays seem to have all the pieces to the puzzle, they just haven't fit together. Maybe now ...

"It's searching and finding the pieces that fit," Thompson said, "and the guys who are willing to play their roles and to their strengths."

The Jays certainly have a go-to guy in leading scorer Kamari Balton, a 6-1 senior. Balton is a dynamic player who scored 35 points in the win over the Kewpies --- including the game-tying shot late in regulation to force OT, and a key 3-pointer late in OT.

"He's always been a good player," Thompson said, "but this year, he's become more of a vocal leader. A lot of these guys look up to him and it's good see to him being so vocal and positive. When he's playing well and playing hard, he's got another gear, and everybody can see the look in his eyes that it's time for business, and I think they follow suit.

"He definitely sets the tone for us."

Sophomore Hudson Nilges has been a potent 3-point threat all season, but 6-3 junior Rae'Quan Davis has only been potent for a few games --- he was ineligible the first semester. But he can be a game-changer (he had 20 points against Hickman) and certainly plays bigger than his listed height.

"He's a versatile player, he's strong --- he's a load and he can go get you 10 rebounds a game," Thompson said. "He's good in the middle of the zone and he can step out and hit 3s, as well. He just brings a whole other element to our basketball team."

Two other recent additions to the mix are 5-9 Brennan Jeffries and 5-11 Ben Folz. What makes them unique? They're freshmen.

"That doesn't happen a lot in Class 5," Thompson said. "But we've been watching these guys play for a while and we knew what they can do, it hasn't been a surprise to us.

"These guys offered something that we needed and it can bring a lot of things to your team, competition being one of those. I think everybody gets better as a result."

Getting better ... again, better late than never. This team has been like a 1,000-piece puzzle, but they've seem to have at least found the corner pieces. Finally.

"For this group, it's been a challenge for them to mentally see the big picture," says Thompson, whose team plays at Battle on Friday night. "We've been pushing hard and waiting for it to come together. But I think we'll be all right, I like our chances going into the end of the year.

"We've won two in a row ... can we make it three and beyond and keep it going into districts? That remains to be seen. But after watching us play and win a tough, hard-fought game (Tuesday night), I feel a lot better about it." 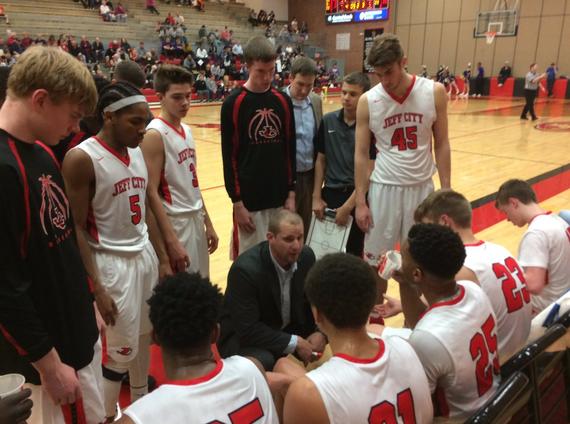