JEFFERSON CITY, Mo. --- Thanks, they needed that.

It really didn't matter how good --- or bad --- the opponent was, they really needed it.

The Jefferson City Jays had to enjoy this one, as they shook off a slow start to throttle the Kansas City East Bears 80-55 during Saturday's Central Bank Shootout at Rackers Fieldhouse.

"We didn't play all that well," Jays coach Blair Thompson said, "but we'll take any win we can get. In particular, they've been a little tougher to come by this year."

The Jays have endured so many near-misses this season --- six losses by six points or less --- games they could have won, if not should have won.

"I'd put them in the should-have category," Thompson said. "We just haven't finished games at the free throw line and we haven't taken care of the basketball. Our record would look a lot different if we'd won a few of those games.

"The ability's there, it's just a matter of actually doing it."

"We didn't start the game like we wanted to," Thompson said. "We were as flat as we've been all year. That's been a big problem for this team, it's something we've addressed and talked about, it's just been tough to figure out."

The Jays (8-12) figured it out the rest of the way, however, as they outscored the Rams 24-13 in the second quarter to take a 34-25 lead at the break. They also figured out they could beat the flat-footed Rams in transition basically anytime they wanted.

"Any time we can get our hands on the ball," Thompson said, "that's what we're trying to accomplish. Get possession and go ... that was a big part of us getting separation in this game.

"We'd like to have been even faster than we were --- we weren't overly active on defense, which slowed us down a little bit. We'd like to play 100 mph."

The Jays played long ball in the third quarter, knocking down five 3-pointers, three of those by sophomore sharp-shooter Hudson Nilges. That helped the lead blossom to 62-45 entering the fourth, and the Rams would get no closer than 17 the rest of the way.

Aric Marks led East with 19 points, while Kamari Balton led five players in double-figures with 21 points for the Jays. Nilges finished with four 3-pointers and scored 14, Garrett Parker and Ben Folz both scored 13, while Chuck Cooper had 11.

Maybe, just maybe, this will serve as a jump-start for the Jays entering the stretch run.

"It's been tough on all of us, it's been frustrating," Thompson said. "Every once in a while, you have to give them a nudge, so to speak , but we're finding ways to stay positive.

"I really believe we have our best basketball ahead of us. We have talented players on this team, we've been trying to put it together and find the right mix of guys ... it's been different every night, it seems like.

"But this is a very capable basketball team, capable of beating teams you might not think it can."

This was definitely a case of saving the best for last.

And wow, what finish it was ... even when it was over, it still wasn't over.

But these Crusaders showed a lot of grit --- the grit to never quit --- and got within one point with 20 seconds left.

The Rams, however, hit four free throws in the closing seconds to turn back the Crusaders 72-20 before an energized crowd at Rackers Fieldhouse.

The affair was played at a frenetic, breakneck pace. There could have been a 10-second shot clock, and there still wouldn't have been many shot clock violations.

The Rams led 16-6 after one quarter and by as many as 12 points in the second, before settling for a 34-24 halftime lead.

The margin was still 43-35 entering the fourth. And while Hogan Prep tried to pull away --- the lead grew back to 11 early in the fourth --- Helias would not go away.

With time running down, and with the Rams up 68-64 and with the ball, a huge block by Dalton Weaver led to a fastbreak, which ended on a 3-pointer by Nick Brandt with 20 seconds left to make it 68-67.

Damien Daniels was fouled and hit both free throws to make it 70-67, before Helias had a 3-ball go off the mark. Two more free throws by Jai'Len Jones with 2 seconds left put the game away, but there was a bit more drama to come --- Landon Harrison canned a half-court shot at the buzzer to make the final 72-70.

The Falcons turned a close game after one quarter into a rout on their way to the 34-point victory.

Thomas Verslues scored eight of his 18 points in the second quarter, and helped Blair Oaks shoot a tidy 54 percent (14-of-26) in the first half.

The fourth flashed across the finish line, thanks to the running clock.

The Falcons --- who've won their last two games by a staggering 67 points, which includes a 33-point win over Warsaw --- also received 13 points each from Dylan Skinner, Jason Rackers and Bryden Pritchett.

It certainly wasn't pretty in the early going for the Lady Jays, but in the end, it didn't matter.

After getting belted into a 10-point deficit in the first quarter, Jefferson City steadied the ship in the second quarter and then routed Saxony Lutheran in the second half to coast to the 15-point win.

The top-ranked Lady Jays (17-1) couldn't buy a bucket in the opening minutes against the Class 3 Lady Crusaders (15-6). An 0-for-8 shooting start helped Saxony take an early 11-1 lead, but from there, the Lady Jays outscored the Lady Crusaders 47-22 the rest of the way.

Jefferson City got back within 13-6 after one quarter and 19-15 at the half, before outscoring Saxony 18-6 in the third quarter to build a 33-25 lead. The Lady Jays closed the door with a 15-8 scoring edge in the fourth.

For Jefferson City --- which held an opponent to 36 points or less for the 11th time this season --- Caitlin Anderson tossed in 15 points and Micah Linthacum added 10.

Laurel Miller led the losers with a game-high 19 points, including 13 of her team's 19 points in the first half.

The Lady Eagles outscored Stoutland 39-17 in the second half to pull away for a 27-point rout of the Lady Tigers.

Stoutland outscored Eugene 14-11 in the first quarter, before the Lady Eagles (12-9) started taking control. They used a 23-15 scoring edge in the second quarter to grab a 34-29 lead at the break, before assuming a 54-38 advantage entering the fourth.

Lexi Dickerson poured in 27 points and Jodi Polly had 10 for Eugene, which outscored Stoutland  19-8 in the final frame to cap the blowout.

The Lady Pintos ripped open a 26-12 lead after one quarter and held on to defeat the Dutchgirls.

California extended its lead to 40-25 lead and still held a 54-39 advantage after three quarters. Owensville --- which is struggling this season after advancing to the school's first Final Four last season --- did get within 58-50 in the fourth on the heels of an 11-4 run, but could get no closer.

The Dutchgirls were just the opposite, as two players accounted for 48 of their 56 points. Junior Breanna Dieselkamp did most of he damage with 34 points, which included a 10-of-11 effort from the free throw line. Savannah Ellis chipped in 14 points in the losing cause.

This was the final game of the four-game girls set in the Shootout, and none of them were decided by single digits --- the average margin of victory was nearly 18 points.

The third quarter was the back-breaker for the Lady Crusaders, as they were outscored 24-7 to stretch the margin to 54-33. But in the fourth, Helias outscored Lebanon 17-13, ending it at 67-50.

Jenna Glendenning added 11 points for the winners, while Ashley Rehagen tallied 13 points and Morgan Wieberg had 11 for Helias.​ 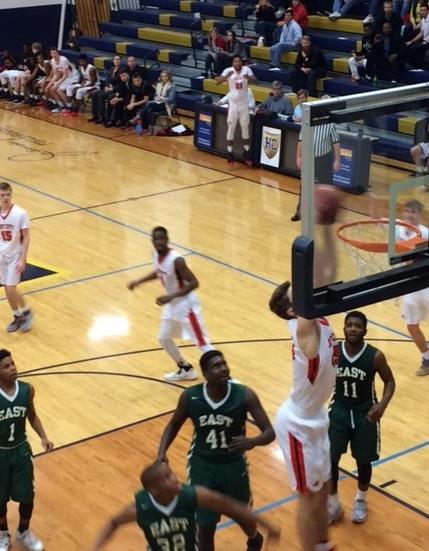 at a great price