Cody Alexander of Blair Oaks is just one of several area standouts to sign with Lincoln on Wednesday. 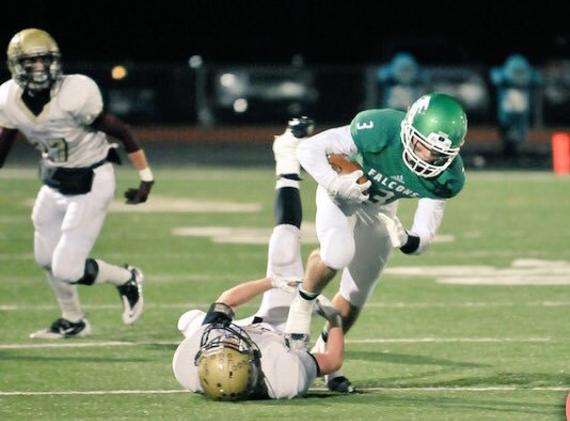 JEFFERSON CITY, Mo. --- Looking east, half way across the country, there's a man who's keeping a lot of his promises.

Some might argue if that's a good thing. Depending on who you ask, it's not always what it's cracked up to be.

Back in Jefferson City, Steve Smith is keeping a big promise ... and it's definitely a good thing.

And for local football fans, it's a great thing.

Smith announced his first recruiting class as head coach of the Lincoln Blue Tigers on Wednesday, a whopping class of 30 players that includes 12 from Central Missouri.

This is significant for two reasons --- first and foremost, these guys are good players who, for the most part, had outstanding, decorated high school careers. But almost as important, it flames the fire for local interest and support, something this program badly needs.

"We talked about blitzing Missouri, and we wanted to make sure that the community was a part of what we were doing," Smith said. "We were really heavy on getting the local kids --- we have to make sure we attack our own backyard, first, before anybody else does."

The move toward getting some local quality in the program started when Smith hired two of Jeff City's favorite sons, the coaching-brother tandem of Phil and Andy Pitts. Then came Wednesday, which only deepened that process --- three players from Battle, two each from Helias, Rock Bridge and Moberly, and one each from Jefferson City High School, Blair Oaks and Hermann.

Smith said he would do this when he was hired, and he's done it. Twelve area players in one class. By comparison, the entire 2016 Lincoln roster had five.

Offensive and defensive lines were Smith's priority, but this recruiting class basically covers all the bases. By position, it's about as balanced as you could want --- five each on the offensive line, defensive line, at defensive back, linebacker, and wide receiver/tight end; three at running back/fullback; and two quarterbacks.

"We were able to get most of the guys on our board, about 90 percent, at every position," Smith said. "That's a great thing.

"Our main focus has been to get recruiting done and now, our focus will be to start the football process of it, working on conditioning, and making sure these guys go to study hall and do what they're supposed to do in the classroom. This was the hard part, getting everybody to come in and sign and making sure they didn't change their mind. Now that the hard part is over, now the easy part starts, where we do what we know we can get done, and that's the football part of it.

"We're going to hit the ground running and put the hard work in. If we do everything we're supposed to do and do it the right way, we're going to get the right results."

Lincoln's struggles are well known and it's a sad tale, indeed --- not just in the last few years, but in the last few decades. The Blue Tigers went 1-10 last fall, they're 11-67 this decade, and they haven't had a winning season in 45 years. 45 years.

This class, however, appears to be a step in the right direction to help turn things around.

"Our expectations are very high and we wanted to make sure we got the players to help us meet those expectations," Smith said, "whether they were Missouri kids or kids outside of Missouri.

"It's a building process ... some people build fast, some people build slow. We'll see how fast we can build. The first couple of steps, I think we've done a great job and now, we're going to put the work in and see what comes out of it."

Along with the local talent, the Blue Tigers landed seven other players from Missouri, while nationwide, the class includes players spanning from Miami to San Diego.

How do you get a guy who lives in Miami or San Diego to come to the middle of Missouri, anyway? No easy task.

"It's kind of a tough sell," Smith said, "but the key part is that we already had kids here on campus from Miami. We talked to these kids over the phone, we flew them in, and they got to see the campus and see what Lincoln was bringing. They got to meet administration, they talked to advisers, they got a chance to see what we're selling.

"They had the opportunity to see it for themselves, they enjoyed it, and that's why they're here. They decided that Lincoln was the best place for them and Jeff City was going to be their new home."

You certainly have to like what you're hearing --- and seeing --- from Lincoln these days. In fact, you might have more optimism about Lincoln football than MU football for the coming years.

Did you ever think you'd see the day?

For more information on these players, please see: http://www.lubluetigers.com/news/2017/2/1/football-2017-lincoln-signing-day-central.aspx

For more information on these players, please see: http://www.mutigers.com/news/2017/2/1/mizzou-football-announces-2017-recruiting-class.aspx?path=football