ASHLAND, Mo. --- Make school history ... it's what they do at Southern Boone these days.

The latest, greatest feat to go on this Wall of Fame comes from the Eagles basketball team, as they were recently regarded the best Class 3 boys team in Missouri.

For the first time in school history. Ever.

Ever is a long time.

"It's an honor to be recognized as the No. 1 team in the state but at the end of the day, we know it's just a number right now," Eagles coach Andy Jahnsen said. "Our ultimate goal is to make a deep playoff run and then the final ranking, that's the most important thing to us.

"And I tell them, 'We want you guys to understand that those seniors who left last year's team are just as much a part of us being No. 1 as you guys are. They put us in this position, they were a huge part of the success we're having now."

There's certainly no shame in losing to the Falcons, especially at the Green House. Besides, teams just don't go undefeated ... unless you're the UConn women.

"Kids have to be humbled at some point and (Tuesday night), that sting was good for us," Jahnsen said. "We had a bad night offensively, we weren't able to convert on things that we normally do.

"But I don't think it was so much about the things we did wrong, I think it was about Blair Oaks being more ready to win that game than we were. They're a good team, Ryan (Fick) does a great job with them ... I respect their program and Tuesday night, they were the better team."

Undefeated seasons are more rare than a phone booth these days, anyway.

"We put a note on the board Wednesday: 'Coach K (Mike Krzyzewski) has never won a national title undefeated.' It's life," Jahnsen said. "I get it, hopefully the kids get it. I had no aspirations of going undefeated this year. If you'd asked me before the season that after Game 16 we were 11-5, I would have said we're having a pretty good year."

The Eagles are now 16-1 --- they remain No. 1 in last week's poll, but that doesn't include the loss --- as they bounced back Wednesday night with a 68-59 win over California. But this story isn't about that win or Tuesday night's loss, it's about how they came to be No. 1 in the first place.

"This is a group of kids that as freshmen, they won four games," Jahnsen said. "Now, here we (were) sitting on top of the roost. So we're pretty excited about how far we've come. It just goes to show, if you work hard in the weight room and in the offseason, good things are going to happen.

"We may not have had a lot of believers three years ago, but we've got a lot now. That's kind of the moral of the story, that's why you never quit and continue to work hard."

THE EAGLES MADE THE CLIMB TO NO. 1 thanks to good coaching, good talent ... and one family moving from Columbia to the Seattle area. Let's not kid ourselves.

Thank you very much, Mr. and Mrs. Porter, because neither Southern Boone nor any other mortal team in Missouri was going to beat Michael and Jontay and Father Tolton.

"Last year, it would have been a Cinderella story if we'd won," Jahnsen said. "At the end of the day, we played well, we just couldn't compete with them. They had a lot of the same pieces we did, but they had it eight or nine inches taller --- and they had an NBA prospect (Michael Porter).

"We had a mountain to climb and there weren't going to be many teams climb that mountain."

The Eagles finished 25-3 last season --- they've won an astounding 41 of their last 45 --- with two of those losses last year coming to Tolton, one of those in the district championship game.

But now, the Trailblazers are just another brick in the wall --- in other words, good but mortal --- making the process wide open instead of tightly closed.

"We've got some really good basketball teams in our district, teams that on any given day could beat us," Jahnsen said. "But if we go in and do what we do well, we have a chance to win a district title. At least the kids know in the back of their minds, we have a chance.

"A year ago, it was hard to say that, it would have been a miracle. It's exciting, it kind of builds on our season, it's what we're looking forward to."

A talented class of eight seniors --- Southern Boone simply has an amazing senior class, overall --- leads the surge. They certainly won't overwhelm you with basketball eye appeal, however, as they come at you with waves of 6-footers.

"When we step on the floor every night," Jahnsen said, "against every team we play, I wonder how many people are sitting in the bleachers thinking: 'This team has no chance to win,' Like when we played O'Hara (in the championship game of the California Tournament), I'm pretty sure there wasn't a soul in the gym who thought we could play with them. And we ended up beating them by 18.

"We're quick, we have a lot of team speed, and we share the ball extremely well. I've had several coaches tell me how much fun it is to watch us share the basketball. And we have five guys who can score and we have a couple, if we need it, who can put up 25 or 30."

Evidence of what they do --- the Eagles average, average, 15 steals and 20 assists a game, and they can drop 10 3-pointers on you on any given night. And despite their size, they still outrebound their opponents by an average of six a game.

"For a bunch of little-bitty guys," Jahnsen said, "we rebound extremely well."

This is probably a crude comparison, but this team might remind you of the Golden State Warriors --- small but quick and man oh man, can they shoot.

"We don't create a lot on our own, we create opportunities for others," Jahnsen said. "Overall, I think we have a really good team-oriented group of boys who play hard. We get after it extremely hard on the defensive end, we create a lot of transition points and shoot the ball extremely well from the outside."

AS STRONG AS THIS SENIOR CLASS IS, it's a sophomore, 6-1 Sam Stichnote, who leads the team in both scoring (17) and rebounding (9).

"He's the total, complete package for what we need to play around the rim," Jahnsen said. "He's a 6-foot-1 high flyer."

While Stichnote certainly isn't perfect, he seems to do everything right.

"He's a smart kid, he's a film rat --- he spends more time on film than most coaches do," Jahnsen said. "He's always trying to find the edge, he's a student of the game and always tries to put himself in the right position to do something at the right moment."

"They all lead in a different way," said Jahnsen, who's in his 14th year at the helm. "Maguire doesn't say a whole lot, but he's the type of kid who leads by example. When you see a guy out there working his tail off on the front end of the press and diving for loose balls, that sets a tone for your team and kids feed off that.

"Defensively, him and Garret bring so much to the table with their ability to pester people. I can't express how much their defensive effort sets the tone for us and what we're trying to get done."

Scheer and Taggart are both four-year starters.

"Spencer is our most vocal leader, he's the guy in the huddle that brings everyone in and keeping everyone on the same page, whether things are going well or not."

The sharp-shooting Scheer, who can "really fill it up," averages 16 a game and joined the 1,000-point club for his career in the win over California, while Taggart averages 11 and seven assists. Senior Zane Safley, who's the tall kid on the block at 6-2, averages 10, while Goodnight is at nine.

"For years," Jahnsen said, "I knew who are leading scorer was going to be nine out of 10 times. But these last two years, I don't even know who scores until the game's over. It comes from so many different facets of what we're doing ... every night, it seems like we have three or four guys in double figures.

"Right now, we're just a really confident basketball team. We want to go fast and I pride myself on defense, I'm a defensive coach. I don't spend a lot of time talking about offense, I preach playing hard and winning every 50-50 ball. I tell the kids all the time --- offense is easy, it takes a man to play defense."

And they do it together. This team is closer than Siamese twins.

"Camaraderie is huge at the high school level and we have a really tight group," Jahnsen said. "They may not hang out on the weekends but in between the line, they're one. We're going to play hard and we're going to respect the game and when you have kids like that, you're going to see a lot of good things happen."

So far, and entering their own tournament this week, there's been plenty of it.

"It's really fun when you get things rolling the right way and you see the pieces falling into place," Jahnsen said. "We weren't sure how we were going to replace Gage (Schupp) and Gannon (Mueller), but we've been able to do that. We've kind of continued on with what we were doing last year.

"When we don't play well, we've still found ways to win ... over the course of a 32-minute game, there were a lot of good stretches and a lot of bad stretches. So ultimately, we need to get better every night out and be peaking at the right time.

If that happens, there might be even more school history in this team's future.

So. Boone 'humbled' by sting
of defeat entering own tourney 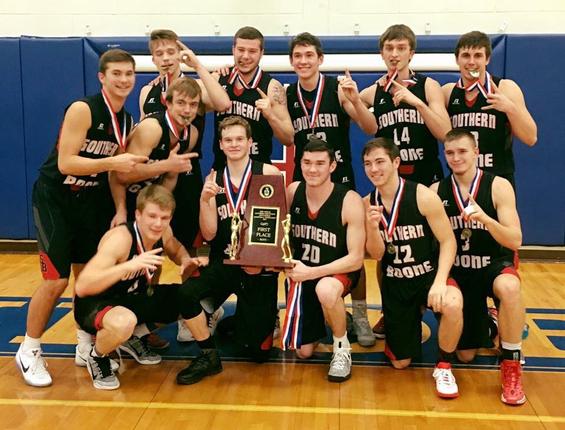 Twelve days after winning the championship of the California Tournament, the Southern Boone Eagles suffered their first loss of the season at Blair Oaks on Tuesday night. But this shouldn't be an issue for this team, coach Andy Jahnsen says.