In reality, however, it was just a continuation of Round 1 ... more of the same.

Tighter than your best friend's wallet.

For most of the rematch, anyway.

Less than three weeks ago, the Southern Boone Eagles edged the Blair Oaks Falcons 68-67 in a championship thriller at the Tri-County Tournament. It was a high-flying affair --- as you might expect between a bunch of Eagles and Falcons --- and came down to the wire.

Tuesday night's rematch was not the same thrilling or aesthetic success --- both teams had trouble shooting, especially in the first half. But only one team had trouble after the break.

In Round 2, Blair Oaks belted Southern Boone with a 14-0 burst in the second half and that proved to be the difference, as the Falcons gained a measure of revenge with a 65-52 win over the Falcons.

That meant in five quarters this season, the margin between the two teams was still one point.

The Falcons tried to get away in the second quarter, and built a 27-20 lead with time running down in the first half. But in a blink --- okay, it was a long blink --- the Eagles scored the final five points in the final 10 seconds to get within 27-25 at the break.

After six quarters, the margin was still one point, this time in favor of the Falcons.

A key point in the game came when Southern Boone's leading scorer, 6-1 sophomore Sam Stichnote, picked up two quick fouls to open the second half and went to the bench with four personals with 5 1/2 minutes left in the third quarter.

The Eagles were still able to build a five-point lead in ensuing minutes, but then the Falcons put together the game-changing --- and game-winning --- run.

With Stichnote on the bench, Blair Oaks scored the final six points of the third quarter to take a 42-37 lead. And after seven quarters, the Falcons were now plus-five.

Two scores by Jason Rackers in the first 30 seconds of the fourth boosted the lead to 46-37, forcing a timeout by Andy Jahnsen, who brought Stichnote back in the game. But it was too late, because the Falcons had the momentum and were off and running.

Blair Oaks beat Southern Boone at its own game in the fourth quarter, forcing turnovers and pushing the ball up the floor at a breakneck pace and getting several easy looks --- as in layups --- to pull away.

After the lead blossomed to 50-37 to finish the run, the Eagles didn't closer than 10 the rest of the way.

The undersized Eagles had no answer for Rackers, as the 6-6 senior racked up 29 points, 18 coming in the second half, and 10 rebounds. Thomas Verslues chipped in 13 points and Tim Fick had 11 for the winners.

For the record, the Falcons are now plus 11 through eight quarters, but more importantly, the "series" is tied 1-1. We need a rubber match, don't we?

The Green House was packed for the rematch between Southern Boone and Blair Oaks on Tuesday night in Wardsville. 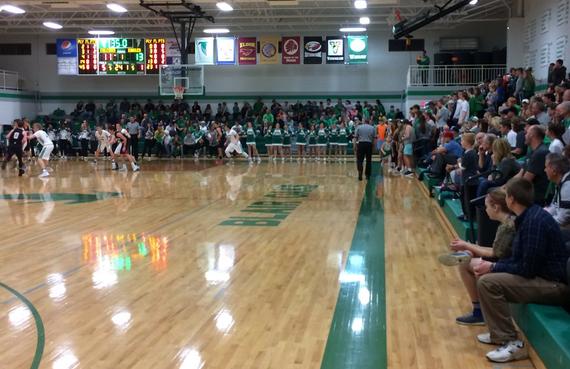 Blair Oaks pulls away in fourth,

evens 'series' with So. Boone