JEFFERSON CITY, Mo. --- It was one of those quarters for the Helias girls.

It turned into one of those halves.

And eventually, one of those games.

The Jefferson City Lady Jays --- who have a better defense than most third-world countries --- made sure of it.

The Lady Jays held the Lady Crusaders to one field goal in the first half --- one --- to build a 16-point halftime lead and cruised from there, a 45-29 win in the annual crosstown showdown at Rackers Fieldhouse on Monday night.

This was just the latest in a series of shutdown defensive efforts for the Lady Jays (15-1), who are still ranked No. 1, for now, although that will likely change when the next poll comes out later this week.

This defense never rests, it's the mantra of this team.

"I told them at the beginning of the season," Lady Jays coach Brad Conway has said, "that defense was going to be our emphasis. We're going to have bad offensive nights, but we can't have bad defensive nights."

The Lady Crusaders (6-9) were seeking their second straight Big Monday upset, as last week, they defeated Southern Boone, which was ranked No. 2 in Class 3 at the time.

Not on this night, even though Jefferson City's offense wasn't very good, either, in the early going.

The Lady Jays were only 3-of-14 from the field in the first quarter, but still led 6-2 after one. Good looks at the basket were few and far between for the Lady Crusaders and when they did get one, nothing doing.

Ball handling was also an issue for Helias. At one point in the first quarter, Helias had committed five turnovers and had just one field goal attempt.

The Lady Crusaders finished the opening frame 0-for-7 from the field, and the drought stretched to 0-for-11 before Ashley Rehagen canned canned a 3-pointers with 1:50 left in the first half.

The lead for the Lady Jays moved to 25-9 at the half, as Jefferson City sophomore Caitlin Anderson scored six of her 10 points in the second quarter. The lead would have been bigger if not for the free throw line --- the Lady Jays were a brutal 1-of-8, while the Lady Crusaders were 6-of-6 .

Helias had its best quarter, by far, in the third, scoring 14 points and cutting the lead to 34-23 entering the fourth quarter. Unfortunately for Helias, it only scored 15 points, combined, in the other three frames.

Sometimes, you don't need any offense at all and still win --- the Lady Jays could have gone scoreless in the fourth quarter and still prevailed by five points.

As you would expect in a rivalry game, Helias keep fighting to the finish and was able to get within nine points early in the fourth, but would get no closer.

Jefferson City's Micah Linthacum, a 6-4 sophomore, led all scorers with 15 points. It was just her third game back after she missed the first two months of the season with an ankle injury. As she continues to sharpen her game, look out.

The Lady Jays --- who won their fourth straight in the series --- have now held teams to fewer than 35 points nine times this season.

Jefferson City's Caitlin Anderson tries to keep her balance as the Helias Lady Crusaders apply the pressure during the first half of Monday night's game at Rackers Fieldhouse. 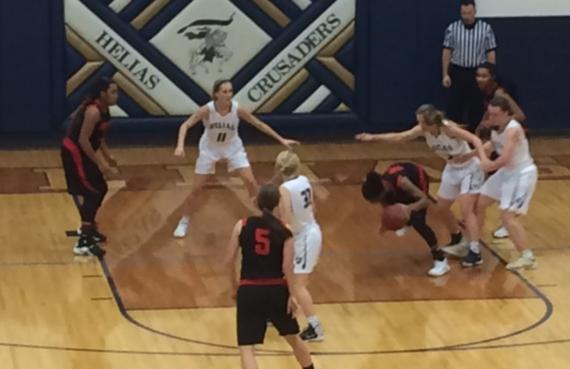