A fall view of the ninth and 18th greens at Railwood Golf Club. 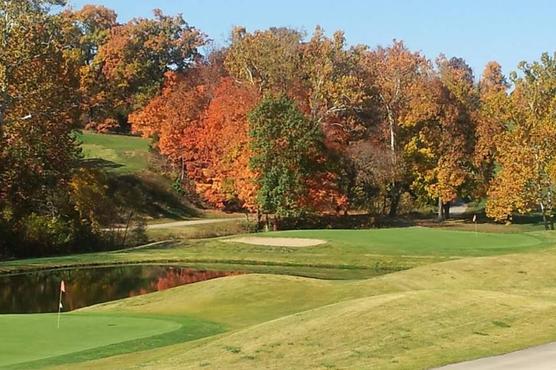 The saga just lasted longer than the average Kardashian marriage, that's all.

It took nine months, but the back and forth and uncertain future of Railwood Golf Club was resolved Thursday, when General Manager Jim Johnson and two others agreed to purchase the final piece of property to keep Railwood an 18-hole course.

"We've been working on this for a while, so we're glad to get it done," Johnson said. "Now, we can have a plan and move forward with it, because when you're not sure what you can do and can't do, you can't make the changes you may want to make."

Johnson declined to mention the other two buyers or the purchase price, but it's believed to be in the area of $1 million.

Here's a quick recap of how we got here:

Previous owner Justin Smith wanted to sell the land for the development of subdivisions or perhaps a cattle farm. Part of the original plan hatched last August was to close the full 18 on Jan. 1. But that changed late last fall --- only the front nine would close, leaving the back nine open, but with a twist.

Then came agreement that was reached April 9 --- it went back to the way it was, pre-August, 2015. But it was literally on a day-to-day basis with a 60-day grace period, in case the property was sold to outside buyers, other than Johnson and his group.

Regardless of what happened, there would have always been that reconfigured nine holes. But with Thursday's purchase of what's basically the front nine, the future of the full 18 holes is secure.

"You could keep the grounds up and do basic stuff," Johnson said. "But if you wanted to do anything else, it was hard to do. So there's a lot of relief."

It's a relief for the players, too.

This year's membership dropped between 30-40 percent, Johnson said, because most believed it would only be a nine-hole course.

"One of the things I heard," Johnson said, "is that people really wanted to be members again, but they weren't sure until they figured out what was going on. I can appreciate that, even though it's not a lot of money from a membership standpoint."

But for the 60-70 percent that kept their membership at a reduced rate, they got a deal.

"We're happy they did, because they stayed with us," Johnson said. "Everything's going to operate like it did before, we want people to know that."

Johnson does indeed plan some immediate changes, just not on the golf course. Still, it's significant.

Renovations will start soon in the clubhouse to make way for a new restaurant/bar and grill. It will feature a wider selection of beer, wine and spirits and an expanded menu, and will be open year-round and later into the night.

There will also be several more televisions installed around the main room of the clubhouse, and they will even have some live entertainment on weekends.

"It's going to cater to this whole area around us (Railwood)," Johnson said. "We think we can draw some people and have some fun with it. "

Johnson hopes the project will be done by the middle of June.

"It might affect the golfers a couple days, but we're not talking about a major project. We're just going to rearrange some things, refresh some things."

For Johnson and those golfers who call Railwood home, they finally know the ending.

And it's a happy one.