How long will cloud linger at MU? 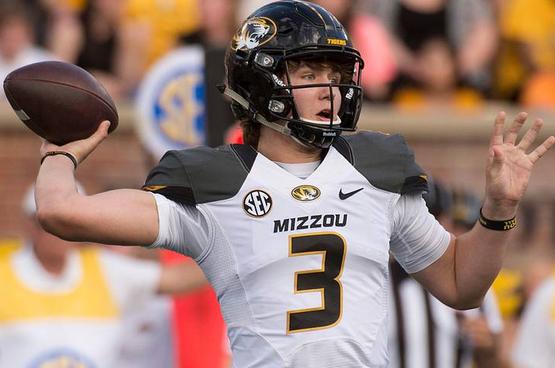 COLUMBIA, Mo. --- On the first play of Saturday's Black and Gold scrimmage, Drew Lock was sacked for a six-yard loss.

On the sixth play, the snap from center sailed over Lock's head for a 20-yard loss.

But like most spring scrimmages, you can't learn much from what you see. It doesn't matter if it's Missouri, Alabama,  or any other team in the country, you just can't.

Even when it's your first one, like it was for head coach Barry Odom. The coach could have been Barry Switzer, Barry Manilow or Lamar Odom, and it wouldn't have mattered.

The highlight of the day may have been the crowd, which was larger than the norm for this event and announced at over 24,000.

A beautiful day to watch a lousy scrimmage.

Of course, the day could have been used to throw a spring tailgate, seeing friends you haven't seen since last fall and won't see again until this fall.

"So impressed, they just did a great job of supporting our team," Odom said. "This program needs our fans, and we are going to work extremely hard and do everything we can to represent them the right way."

On the field, the best news came on the injury front --- nothing major. Defensive end Walter Brady did leave on a cart for precautionary reasons, after the sophomore suffered what appeared to be a hyper-extended left knee. His prognosis is good.

Overall, what we did see was more of the same from last fall. With eight returning starters, the defense looked good. The offense, with five back, didn't. Both, Odom said, used only one page of the playbook.

"In practice, we were going at each other pretty good from both sides of the ball," Odom said. "Competitively, that's what I want in our program ... I wanted them line up and play hard, smart, and tough. There were also some sloppy things in there, too, and you don't want that."

The biggest disappointment during last fall's disappointing 5-7 season was the offensive line, which couldn't block a kindergarten lunch line.

Lock did have some good moments through the air, as he completed 9-of-13 for 134 and two scores. One of those scores and nearly half the yards came in the third quarter when he found J'Mon Moore for a 64-yard touchdown.

"Drew put some touch on it, enough touch for me to get it," Moore said. "And I did the rest."

Lock, a sophomore this fall, also threw a 4-yard score to Richaud Floyd.

"I think Drew did pretty well, but that's what I expect from him," Moore said. "Drew isn't a young guy anymore, in my eyes. He has to be a leader and he's been playing like a leader."

Sophomore quarterback Marvin Zanders accounted for the day's third touchdown, a 19-yard touchdown toss to a leaping Justin Smith in the fourth quarter.

"I'm excited about where we can take both sides of the football, offensively, defensively, and you throw kicking in there, too," Odom said.

Absolutely, for spring is the season for optimism.

But mostly, it will be interesting to see how the Tigers perform this season after last season's calamity. New coaches, new players, but that lingering, heavy, black cloud of uncertainty remains.

How much it remains, we just don't know. How much damage it did, we probably won't know for years.

We do know this much. Forget about football, the school's enrollment will be down an estimated 25 percent --- 25 PERCENT --- this fall.

All thanks, you would think, to that chaotic, forgettable fall of 2015, which brought national attention to the campus for all the wrong seasons.

Here's a brief recap of the events, all of which involved the football team:

* Jonathan Butler goes hungry. His hunger strike was the poster child for the racially-charged campus unrest.

* Football team goes on strike, in support of Butler.

* Both Butler and the team end their strike after the hierarchy at MU was dismantled --- both the president and chancellor stepped down.

What a mess it was, both on and off the field.

So watching a lousy scrimmage on a beautiful spring day wasn't that bad after all, was it?

But you have to wonder --- with a serious and perhaps sad eye --- what the future is going to hold.